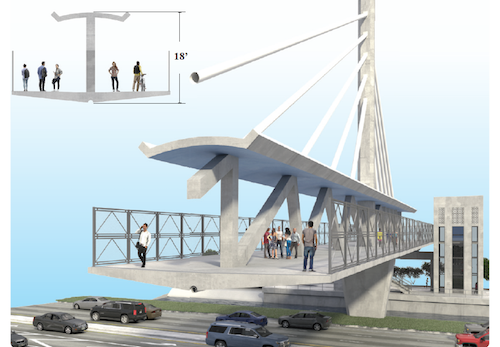 On March 15 at 1:47 p.m. Florida International University’s (FIU) $14.2 million UniversityCity pedestrian bridge suddenly collapsed killing 6 people and seriously injuring 10 others, crushing vehicles below, and requiring days to clear the scene. As originally proposed, the bridge was touted as a stunning architectural showpiece and its rapid construction method touted as efficient, less risky and safe. However, the bridge collapsed a mere five days after it was hoisted into place.

While the exact cause of this astonishing bridge collapse and horrific tragedy is not yet known, a lot of speculation is being disseminated. The fact is, we will not know the exact (or most-likely) failure mechanism for some time to come. However, some unfortunate and incontrovertible truths do exist at this time.

Firstly, from both an engineering standpoint and from a construction safety standpoint, this tragedy was entirely unnecessary, could have been prevented, and should never have occurred. When all of the forensic studies and examinations regarding this bridge failure have been concluded, no one will be able turn around and say there was no way to have prevented this tragedy, or, there was nothing that could have been done differently.

Sudden bridge collapses of this magnitude are infrequent and, obviously, we do know how to construct bridges safely. So, whatever did go wrong here either could have been prevented, or at least could have been better accounted for such that loss of life and catastrophic damage did not ensue.

The construction methodology used to build the bridge was an existing technique called “accelerated bridge construction” (ABC) that essentially involves constructing the bridge deck components offsite and hoisting them into place once the span supports, or pylons, have been constructed onsite. This allows vehicular traffic to flow on the roadway below with only minimal, planned disruptions.

Both the engineering community and construction industry generally regard ABC as a time-tested method that has been used successfully, time and time again. The ABC method itself will not have been the root cause, but how it was planned and carried out, specifically regarding the UniversityCity pedestrian bridge construction, certainly will be a significant factor and will be highly scrutinized.

On March 15 at 1:47 p.m., the UniversityCity pedestrian bridge was no longer able to support its own weight and it collapsed suddenly. Or, put another way, the bridge collapsed at the precise moment that it could no longer support its own weight. So, what engineering principles or precepts were violated that led to this sudden bridge collapse? This question will only be answered once all of the necessary and required forensic studies and examinations have been concluded.

Although it was a pedestrian bridge, it comprised a massive 32-foot wide, 950-ton concrete structure, spanning 174 feet, over a six-lane roadway and a canal. The structural design concept of the bridge decks mainly involved a concrete truss reinforced by post-tensioned steel tendons. A 109-foot high central pylon, yet to be constructed, would have added more steel cables, and thus more stability, to the overall structure.

Based on what has been reported in the press so far, we have been told that support cables were being tightened, following a stress test, just before the collapse occurred. We have also learned that cracks were observed in the concrete at the north end of the bridge and these were the subject of some discussion the morning of the collapse. It has also been reported by the Associated Press that a key design change was issued involving the relocation of a main support structure 11 feet to the north, widening the spanned distance between supports at either end. The project’s budget and schedule were significantly impacted, adding $2.6 million to the $9.4 million budget and another 6 months to the schedule.

These particular events and circumstances raise more questions than they answer and have been the subject of much speculation to date. That said, it is important not to speculate, apportion blame, or make conclusions before all of the facts are in and all circumstances surrounding the collapse are well understood.

However, it is entirely fair to begin asking some very crucial questions about what, as engineers and builders, we should be focusing on during the investigation and what things we may need to modify or change as a result of this tragedy to prevent something like this from ever happening again.

For example, was the overall concept too ambitious and not technically feasible after all? How was risk addressed concerning any design changes? Do we have ample oversight, checks-and-balances, risk management procedures and communications during the design and construction phases of public projects? Does the ABC methodology need to be re-examined and more safety features considered that, for example, add redundancy during construction, such as temporary shoring, for the possible event of a sudden or gradual failure before a bridge is completed? Did the pre-failure cracks observed in this case indicate in any way that a failure was imminent or likely? Could the post-tensioning methodologies employed have allowed for a temporary release of steel tension that led to the collapse? Overall, what aspects and circumstances of this unique and specific situation could possibly re-occur and can be applied to the risk management and safety of other similar projects moving forward?

Without rushing to judgment or unfounded assumptions, it will be important to ask these and similar questions and to follow this matter closely to its ultimate conclusion. There will be very important lessons to be learned here and, as engineers, it is up to us to identify them, communicate them, and administer them going forward.

Thirdly, every aspect of design and construction of the failed bridge will undergo more scrutiny post-collapse than that of the design-build process itself. Key, leading forensic experts have already been tasked with assessing the events leading up to this tragedy, examining the evidence, and determining the cause of failure. The level of scrutiny will be intense, exacting and, ironically, far greater than the level expended for the actual design review, risk management or construction oversight.

As a forensic engineer myself, I can attest to the fact that the forensic experts involved will not be under the same time and budget constraints or limitations that we would normally find in a design or construction contract. Essentially, a cadre of experts of every necessary discipline will eventually be employed by the various interested parties to evaluate and examine every piece of evidence and provide opinions and testimony. Everything will be examined and studied including the overall design concept, design changes, design calculations, risk management procedures, materials and physical evidence, construction methods, scheduling and construction sequencing, digital media, project documents, conversation logs, field records, personal testimony, and more. No stone will be left unturned.

Lastly, people will be held accountable. Two civil lawsuits have been filed already, with many more to follow. The first lawsuit was filed only four days following the collapse and the second only five days later. State and federal agencies have also launched a number of investigations into this tragedy. Meanwhile, the Miami-Dade Police Department homicide defectives have opened up a homicide investigation and criminal charges are possible pending their investigation.

The cause of the UniversityCity pedestrian bridge collapse will eventually be understood. Critical lessons will be learned and discussed at length within the engineering, construction and legal communities. But, the most important and crucial take-away is that this tragedy should never have been allowed to happen in the first place and cannot be allowed to occur again in the future. After all, we owe it to the families of those lost by this horrific tragedy, the people who were injured, and the general public to prevent this type of catastrophic from ever re-occurring.