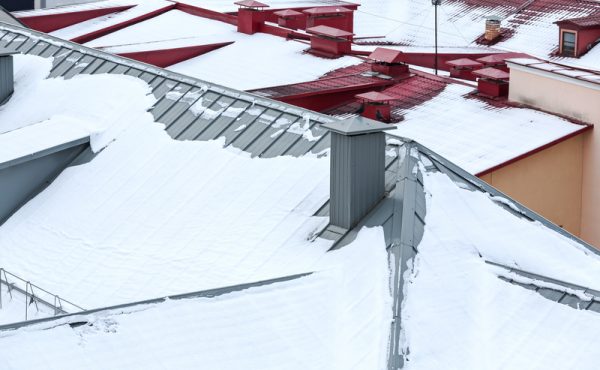 The Boston Globe, on Thursday, March 5, 2015, reported officials said 231 buildings have collapsed or suffered serious damage so far this season due to heavy ice and snow loads. A total of fifteen collapses were reported on March 5 alone. Why so many? And, what careful considerations should be made upon inspecting the damage and documenting a building collapse claim?

Here’s why. With all of the frequent and heavy snow in New England so far, the temperatures are warming up to above freezing for longer periods of time allowing the snow to partially melt, but then it re-freezes into ice as temperatures drop again. This tends to block roof drains and scuppers as ice dams are created. Any more snow or snow/rain mix just adds more weight to roofs that have been stained for some time already. And, as flat roofs deflect and sag they can hold even more water.

As pointed out in the Boston Globe article, heavy wet snow can weigh about 21 pounds per cubic foot and pure water adds about 62 pounds per cubic foot. To make matters worse, buildings of various ages have been constructed under earlier and less stringent building codes so their capacities to hold the added weight can be severely limited. Additionally, any existing building deterioration or substandard modifications made to the building over the years can also contribute to collapse. Thus, failures occur.

Proper investigation and documentation of a roof or building collapse is imperative when it comes to supporting the original insurance claim as well as any subrogation action. It’s simply not sufficient to say the roof collapse was obviously a result of heavy snow loads. The investigating engineer must observe the big picture, yes, but must also examine the details of the collapse including aspects like what part of the building was affected, which members (e.g., columns and beams) failed, what connectors failed (if any), where exactly did the failure originate from, and what specific conditions existed at the time of collapse, to name several important aspects.

The engineer should also look for any other conditions that may have contributed to the collapse such as contributing site conditions, existing deterioration, or substandard repairs or modifications made to the building. Also, any evidence that needs to be collected and preserved should be done so carefully and methodically under proper chain-of-custody protocols.

The investigating engineer needs to be called out to the site immediately in order to document the occurrence before conditions significantly change and preferably before anything is removed or demolished. Also, the sooner that any potentially responsible parties are contacted the better so that their experts have every opportunity to observed the occurrence scene and participate in any evidence evaluation and testing.