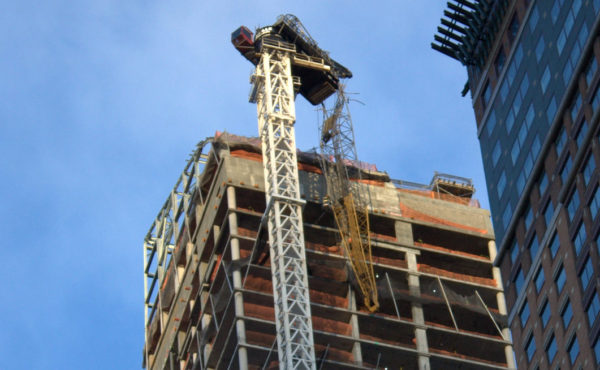 One of the most iconic images of Superstorm Sandy’s wrath has been the collapsed tower crane atop the under-construction One57 Building, a 74-story tower located at 157 West 57th Street in Manhattan. When we think of the hundreds of billions of dollars worth of damage from severe storms over the past couple of decades alone, most people naturally assume that the majority of such damage is, of course, covered by insurance. Isn’t it?

Ironically, damage to this iconic crane, along with resulting damage to the building, was not covered. The insurer denied coverage even though there was a $700 million builder’s risk policy in place that covered temporary structures. But, how could this be?

After an almost four-year-long legal battle involving three courts, last winter the State of New York Court of Appeals made their ruling in favor of the insurer in Lend Lease (US) Construction LMB Inc. v. Zurich American Insurance Co.1 Based on court records, the original suit was filed during September 2013 in the New York State Supreme Court and went on to the Appellate Division during 2015.

On October 29, 2012, Superstorm Sandy struck New York City and catastrophic damage was sustained to both the crane, and the under-construction building tower, due to severely high winds that ultimately collapsed the crane. Subsequently, the plaintiffs filed a number of claims that were rejected by the defendants. The plaintiffs later filed suit seeking a declaration of insurance coverage for damage to the tower crane and the unfinished One57 Building, estimated to be over $10 million. After a number of court battles, including a decision by the Appellate Division in favor of the insurer, the case ended up in the State of New York Court of Appeals for a final ruling.

The first question was whether or not the crane could actually comprise a “temporary structure” as defined by the policy. After all, it was certainly a “structure” that was affixed to the building for a set, temporary period of time and was to be removed after certain construction activities were completed and the crane was no longer needed. Only portions of the crane installation, as needed to reinforce the building tower and provided support for the crane, would be permanently left in place. Such items included steel ties and reinforcements along the tower portion of the crane and steel beams installed in the concrete floor slab at the crane’s base.

The final question was whether the contractor’s tools exclusion rendered the temporary works provisions illusory by essentially being too all encompassing, therefore rendering the exclusion ineffective. Here, the Court of Appeals concluded that if coverage for at least some acts was provided (even given a potentially wide exclusion), then the temporary works provisions were not illusory. The Court acknowledged items that potentially could be covered, such as scaffolding, formwork, falsework, shoring and fences, which were not, by definition, contractor’s tools.

On February 14, 2017, it was decided by the State of New York Court of Appeals that the order of the Appellate Division should be affirmed, and with costs. So, what lessons can be learned from all of this?

For one thing, it becomes absolutely critical for developers and builders to fully understand the terms and definitions of their builder’s risk policy. This entire situation clearly underscores the need for a complete and accurate understanding of exactly which items are insured and which items are not covered. Only then can critical decisions regarding unacceptable risk, versus acceptable risk, can be made. But largely, this situation points out that the proper insurance should be identified and procured based upon the potential or likelihood for a catastrophic loss, the likely dollar value of a potential catastrophic loss, and the cost of procuring the proper insurance coverage.

According to an article by Engineering News-Record (ENR)2, the insurer had argued that Extell and Lend Lease needed to pay for an endorsement that specifically included the tower crane in the builder’s risk insurance policy. The article stated that Jeffery Haynes, National Heavy Construction Equipment Practice Leader for broker USI Insurance Services, placed the cost for insuring such a crane at approximately $40,000.

This cost amounts to only a fraction of the $700 million total estimated project cost. This also pales in comparison to the dollar value of the total losses incurred.

The take-away? It is critical that builders and contractors know their policies, understand the limits of their coverage, and always procure the right insurance in the right amounts for anticipated or likely risks.